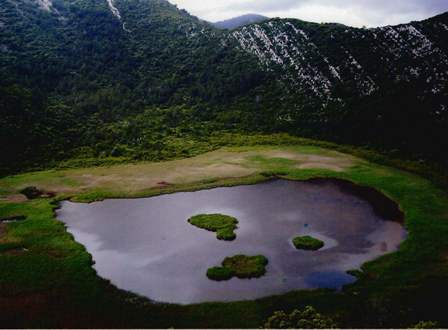 Triassic magmatic rocks in the Central Dinarides in Bosnia and Herze-govina are known from two separate geotectonic units: (1) the AdriaticCarbonate Platform (Outer Dinarides) and (2) the Palaeozoic–Triassicallochthonous complex. They are assigned to the same regional, genetic and geochemical unit. Their emplacement age is inferred from contacts with the surrounding marble and sedimentary rocks (post-Anisian for intrusives and Ladinian for effusives).The magmatic rocks display different levels of emplacement and crystallization (intrusive, effusive and dyke rocks). They represent different stages of magmatic differentiation, from gabbro/basalt via diorite/andesite to granodiorite/dacite and granites. The most frequent dyke rock is diabase. Pillow basalts indicate eruption under subaquaticconditions. Pyroclastic rocks within the volcano-sedimentary unit point to the temporary explosive character of orogenic magmatic activity. Most rocks are affected and modified by post-magmatic alteration and hydrothermal fluids. This led to the formation of spilite, keratophyre, quartz keratophyre and rarely K spilite.New geochemical data support the opinion that subduction was the main process which triggered the Triassic magmatic activity in the Central Dinarides. Although some of the investigated rocks reveal MORB characteristics (in the selected geochemical discriminations), most samples are enriched in all elements which are reported as characteristicfor arc magmatism at convergent margins including incorporationof sediments.